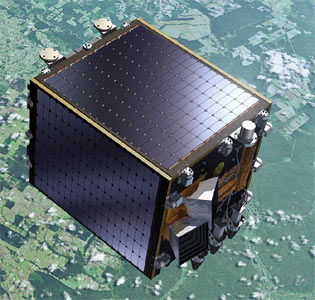 PROBA-V (Project for On-Board Autonomy - Vegetation) is an attempt, spearheaded by ESA and CNES, to accommodate an improved smaller version of the large VGT (Vegetation) optical instrument of SPOT-4 and SPOT-5 mission heritage on a small satellite bus.

Proba-V flies a reduced-mass version of the Vegetation instrument currently on board the Spot satellites to provide a daily overview of global vegetation growth.

Bearing a different designation from its predecessors, Proba-V is an operational as well as experimental mission, designed to serve an existing user community. The aim is to guarantee data continuity for the Vegetation dataset once the current Spot missions end.

Additionaly, PROBA-V carries an ADS-B (Automatic Dependent Surveillance-Broadcast) receiver system as a hosted payload to investigate if it is technically feasible to receive in orbit ADS-B signals from aircrafts.

PROBA-V was constructed to be compatible with the Vega, Soyuz and Falcon-1e launch vehicles. It was selected as the primary payload for the second test flight of the Vega launch vehicle.