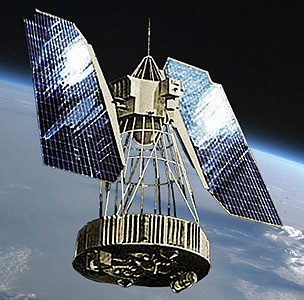 Nimbus 1, the first in a series of second-generation meteorological research-and-development satellites, was designed to serve as a stabilized, earth-oriented platform for the testing of advanced meteorological sensor systems and for collecting meteorological data. The polar-orbiting spacecraft consisted of three major elements:

The solar paddles and the control system housing were connected to the sensory ring by a truss structure, giving the satellite the appearance of an ocean buoy. Nimbus 1 was nearly 3.7 m tall, 1.5 m in diameter at the base, and about 3 m across with solar paddles extended. The sensory ring, which formed the satellite base, housed the electronics equipment and battery modules. The lower surface of the torus-shaped sensory ring provided mounting space for sensors and telemetry antennas. An H-frame structure mounted within the center of the torus provided support for the larger experiments and tape recorders. Mounted on the control system housing, which was located on top of the spacecraft, were sun sensors, horizon scanners, gas nozzles for attitude control, and a command antenna. Use of a stabilization and control system allowed the spacecraft's orientation to be controlled to within plus or minus 1 deg for all three axes (pitch, roll, and yaw). The spacecraft carried

A short second-stage burn resulted in an unplanned eccentric orbit. Otherwise, the spacecraft and its experiments operated successfully until 22 September 1964. The solar paddles became locked in position, resulting in inadequate electrical power to continue operations.

Nimbus 2 added an additional medium-resolution infrared radiometer (MRIR) for measuring the intensity and distribution of electromagnetic radiation emitted by and reflected from the earth and its atmosphere. The spacecraft and experiments performed normally after launch until 26 July 1966, when the spacecraft tape recorder failed. Its function was taken over by the HRIR tape recorder until 15 November 1966, when it also failed. Some real-time data were collected until 17 January 1969, when the spacecraft mission was terminated owing to deterioration of the horizon scanner used for earth reference.