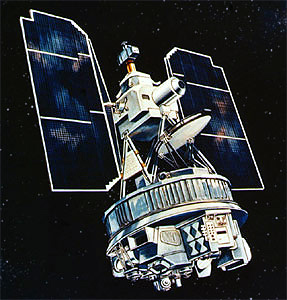 The Nimbus 7 research-and-development satellite served as a stabilized, earth-oriented platform for the testing of advanced systems for sensing and collecting data in the pollution, oceanographic and meteorological disciplines. The polar-orbiting spacecraft consisted of three major structures:

Configured somewhat like an ocean buoy, Nimbus 7 was nearly 3.04 m tall, 1.52 m in diameter at the base, and about 3.96 m wide with solar paddles extended. The sensor mount that formed the satellite base housed the electronics equipment and battery modules. The lower surface of the torus provided mounting space for sensors and antennas. A box-beam structure mounted within the center of the torus provided support for the larger sensor experiments. Mounted on the control housing unit, which was located on top of the spacecraft, were sun sensors, horizon scanners, and a command antenna. The spacecraft spin axis was pointed at the earth. An advanced attitude-control system permitted the spacecraft's orientation to be controlled to within plus or minus 1 deg in all three axes (pitch, roll, and yaw). Eight experiments were selected:

These sensors were capable of observing several parameters at and below the mesospheric levels.