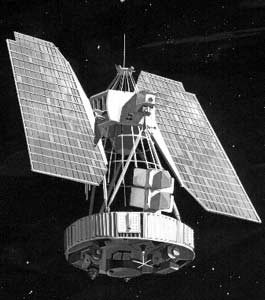 The Nimbus-B meteorological R&D satellite was designed to serve as a stabilized, earth-oriented platform for the testing of advanced systems for sensing and collecting meteorological data. The spacecraft consisted of three major structures:

Shaped somewhat like an ocean buoy, Nimbus-B was nearly 3.7 m tall, 1.5 m in diameter at the base, and about 3 m across with solar paddles extended. The torus-shaped sensor mount, which formed the satellite base, housed the electronics equipment and battery modules. The lower surface of the torus provided a mounting space for sensors and telemetry antennas. An H-frame structure mounted within the center of the torus provided support for the larger experiments and tape recorders. Mounted on the control housing unit, which was located on top of the spacecraft, were sun sensors, horizon scanners, gas nozzles for attitude control, and a command antenna. Use of the attitude control subsystem (ACS) permitted the spacecraft's orientation to be controlled to within plus or minus 1 deg for all three axes (pitch, roll, and yaw). Primary experiment subsystems on Nimbus-B consisted of

The spacecraft never achieved orbit because of a malfunction in the booster guidance system forced the destruction of the spacecraft and its payload during launch. No radioactivity was released in the environment. The SNAP-19 RTG was salvaged from the water, refurbished and later flown on Nimbus 3.

Less than 1 yr later, an identical payload was successfully flown on Nimbus 3. Nimbus 3 was successful and performed normally until 22 July 1969, when the IRIS experiment failed. The HRIR and SIRS experiments were terminated on 25 January 1970, and June 21, 1970, respectively. The remaining experiments continued operation until September 25, 1970, when the rear horizon scanner failed. Without this horizon scanner, it was impossible to maintain proper spacecraft attitude, thus making most experimental observations useless. All spacecraft operations were terminated on 22 January 1972.