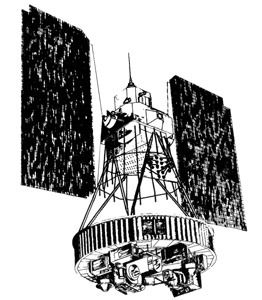 Nimbus 4, the fourth in a series of second-generation meteorological research-and-development satellites, was designed to serve as a stabilized, earth-oriented platform for the testing of advanced meteorological sensor systems, and for collecting meteorological data. The polar-orbiting spacecraft consisted of three major structures:

The solar paddles and the control system were connected to the sensor mount by a truss structure, giving the satellite the appearance of an ocean buoy. Nimbus 4 was nearly 3.7 m tall, 1.45 m in diameter at the base, and about 3 m across with solar paddles extended. The torus-shaped sensor mount, which formed the satellite base, housed the electronics equipment and battery modules. The lower surface of the torus ring provided mounting space for sensors and telemetry antennas. An H-frame structure mounted within the center of the torus provided support for the larger experiments and tape recorders. Mounted on the control system housing, which was on top of the spacecraft, were sun sensors, horizon scanners, gas nozzles for attitude control, and a command antenna. Use of an advanced attitude-control subsystem permitted the spacecraft's orientation to be controlled to within plus or minus 1 deg for all three axes (pitch, roll, and yaw). Primary experiments consisted of

The spacecraft performed well until 14 April 1971, when attitude problems started. The experiments operated on a limited time basis after that time until 30 September 1980.