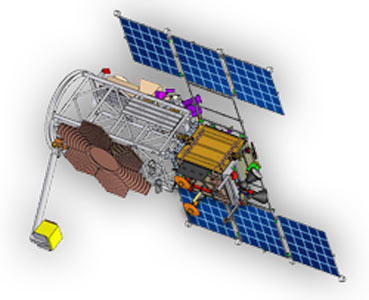 The satellite is built on an surplus bus from the Kanopus-V and BKA 1 programs.

The objective of the mission is the observation of ultra-high energy cosmic rays and studies of transient phenomena in the Earth's upper atmosphere.

The main instrument is the TUS detector, which was originally planned to be a independent free flying satellite called TUS. The TUS (Tracking Ultraviolet Set Up) detector will be used for measurements of fluorescence light, radiated by EAS (Extensive Air Showers) of Ultra High Energy Cosmic Rays (UHECR) in the earth atmosphere as well as for transients studies within UV-range.

For the first time a mirror-concentrator 2 m² in area with a matrix of UV-detectors in its focus is launched to the orbit. This "camera" provides an opportunity for separation and observation of the evolution of UV-bursts with by a factor of 104 lower brightness than its carried currently by means of video-cameras (with up 2 cm² inlet area).

There are also three identic gamma-detectors in the energy range 0.02-5.0 MeV onboard satellite with 90° between axes.

There are several other instruments on board: