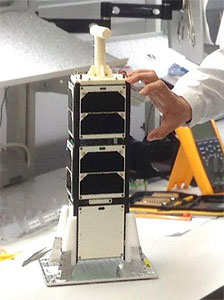 SamSat-218/D, also known as Kontakt-Nanosputnik, is a 3U CubeSat class satellite developed by the Samara State Aerospace University (SSAU).

SamSat-218/D will demonstrate attitude stabilization by use the aerodynamic forces. The satellite body itself is a 2U CubeSat structure with an additional empty 1U compartment for aerodynamic stabilization.

The satellite was launched piggy-back using a cubesat deployer developed by RSC Progress on the Soyuz-2-1a Volga rocket inaugurating the new Vostochny cosmodrome.