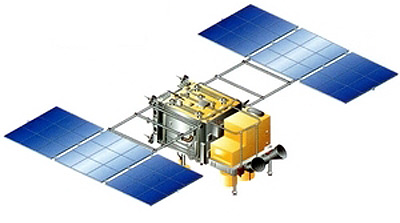 BKA (formerly known as BelKa 2) is a Belarusian remote sensing satellite that replaces the BelKa 1 satellite lost in an launch failure.

The BKA satellite is a virtual copy of the Russian Kanopus-V 1. The resolution up to 2.1 m and four spectral channels of the target-oriented equipment allow for national economic tasks to the benefit of MINECONOMRESURS, Ministry of Natural Resources, Federal Geodesy and Cartography Service, EMERCOM, etc. In addition to key tasks the spacecraft will enable scientific and applied researches in the Earth and atmosphere remote sensing.

The satellite was built by NPO VNII Elektromekhaniki, who subcontracted the avionics suite to SSTL.

The tasks to be fulfilled by BKA are:

A similar second satellite, BKA 2, is planned for 2023 to replace BKA 1. It might be of a different design.