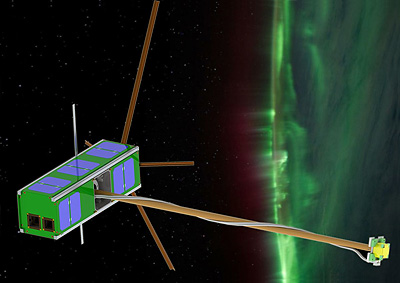 ELFIN (Electron Losses and Fields Investigation) or ELFIN A is a 3U cubesat mission under development by the Earth, Planetary, and Space Sciences department at UCLA in collaboration with the Aerospace Corporation to explore the mechanisms responsible for the loss of relativistic electrons from the radiation belts.

ELFIN is a spin-stabilized 3U CubeSat with a science mission to explore electron precipitation in the radiation belts. ELFIN spins like a hammer spinning head over handle to be able to resolve the full range of pitch angles.

The science instruments are being developed by UCLA staff at the Institute for Geophysics and Planetary Physics (IGPP) and the Earth, Planetary, and Space Sciences department (EPSS).

The project is currently a participant in the NS-8 round of the Air Force Research Laboratorys University Nanosatellite Program and is being designed for a late 2015, early 2016 delivery date.

ELFIN* (ELFIN-STAR, Electron Losses and Fields Investigations Spatio-Temporal Ambiguity Resolver) or ELFIN B is a twin mission of ELFIN. It was selected in 2018 by NASA's CubeSat Launch Initiative (CSLI) to be launched as part of the ELaNa program. on the same flight as ELFIN also on the ELaNa-18 mission.