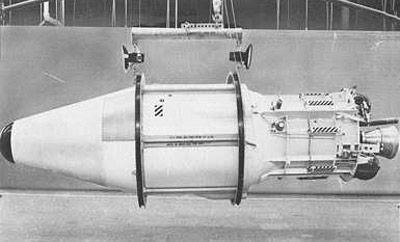 Discoverer 1 was a technology demonstration satellite to test of the performance capabilities of the propulsion and guidance system of the booster and to test systems for the Discoverer and Corona reconnaissance satellite program.

Unlike future Discoverer flights, Discoverer 1 one did not carry a camera or film capsule. It was a 5.73 m long, 1.52 m diameter cylindrical Agena-A upper stage capped by a conical nosecone. The satellite casing was made of magnesium. Most of the 18 kg payload, consisting of communication and telemetry equipment, was housed in the nosecone. It included a high-frequency low-power beacon transmitter for tracking and a radar beacon transmitter with a transponder to receive command signals and allow long-range radar tracking. Fifteen telemetry channels (10 continuous and 5 commuted) were used to relay roughly 100 aspects of spacecraft performance.

The first launch attempt failed, when during launch preparations the time Agena upper stage was activated and the stage fired the separation system and the ullage motors on the launch pad, damaging the Thor booster beyond repair.

The launch on 28.02.1959 was reported to have been successful at the time and announced as the first satellite launch into polar orbit, but it transpired later, that no signals of the satellite were picked up in orbit. Now it is generally believed, that the satellite did not reach orbit and impacted in the Antarctic.