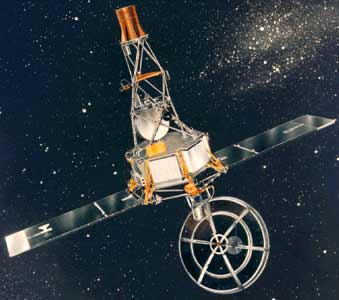 The Mariner 1 and 2 spacecraft were the first series of spacecraft used for planetary exploration in the flyby, or nonlanding, mode and the first spacecraft to successfully encounter another planet. Mariner 2 was a backup for the Mariner 1 mission which failed shortly after launch to Venus. The objective of the Mariner 1 and missions was to fly by Venus and return data on the planet's atmosphere, magnetic field, charged particle environment, and mass. It also made measurements of the interplanetary medium during its cruise to Venus and after the flyby.

They consisted of a hexagonal base, 1.04 meters across and 0.36 meters thick, which contained six magnesium chassis housing the electronics for the science experiments, communications, data encoding, computing, timing, and attitude control, and the power control, battery, and battery charger, as well as the attitude control gas bottles and the rocket engine. On top of the base was a tall pyramid-shaped mast on which the science experiments were mounted which brought the total height of the spacecraft to 3.66 meters. Attached to either side of the base were rectangular solar panel wings with a total span of 5.05 meters and width of 0.76 meters. Attached by an arm to one side of the base and extending below the spacecraft was a large directional dish antenna.

The Mariner power system consisted of the two solar cell wings, one 183 cm by 76 cm and the other 152 cm by 76 cm (with a 31 cm dacron extension (a solar sail) to balance the solar pressure on the panels) which powered the craft directly or recharged a 1000 Watt-hour sealed silver-zinc cell battery, which was used before the panels were deployed, when the panels were not illuminated by the Sun, and when loads were heavy. A power-switching and booster regulator device controlled the power flow. Communications consisted of a 3 Watt transmitter capable of continuous telemetry operation, the large high gain directional dish antenna, a cylindrical omnidirectional antenna at the top of the instrument mast, and two command antennas, one on the end of either solar panel, which received instructions for midcourse maneuvers and other functions.

Propulsion for midcourse maneuvers was supplied by a monopropellant (anhydrous hydrazine) 225 N retro-rocket. The hydrazine was ignited using nitrogen tetroxide and aluminum oxide pellets, and thrust direction was controlled by four jet vanes situated below the thrust chamber. Attitude control with a 1 degree pointing error was maintained by a system of nitrogen gas jets. The Sun and Earth were used as references for attitude stabilization. Overall timing and control was performed by a digital Central Computer and Sequencer. Thermal control was achieved through the use of passive reflecting and absorbing surfaces, thermal shields, and movable louvers.

The scientific experiments were mounted on the instrument mast and base. A magnetometer was attached to the top of the mast below the omnidirectional antenna. Particle detectors were mounted halfway up the mast, along with the cosmic ray detector. A cosmic dust detector and solar plasma spectrometer detector were attached to the top edges of the spacecraft base. A microwave radiometer and an infrared radiometer and the radiometer reference horns were rigidly mounted to a 48 cm diameter parabolic radiometer antenna mounted near the bottom of the mast. All instruments were operated throughout the cruise and encounter modes except the radiometers, which were only used in the immediate vicinity of Venus.

Mariner 1 launch failed as the vehicle was destroyed by the Range Safety Officer 293 seconds after launch at 09:26:16 UT when it veered off course. The booster had performed satisfactorily until an unscheduled yaw-lift (northeast) maneuver was detected by the range safety officer. Faulty application of the guidance commands made steering impossible and were directing the spacecraft towards a crash, possibly in the North Atlantic shipping lanes or in an inhabited area. The destruct command was sent 6 seconds before separation, after which the launch vehicle could not have been destroyed. The radio transponder continued to transmit signals for 64 seconds after the destruct command had been sent.

The failure was apparently caused by a combination of two factors. Improper operation of the Atlas airborne beacon equipment resulted in a loss of the rate signal from the vehicle for a prolonged period. The airborne beacon used for obtaining rate data was inoperative for four periods ranging from 1.5 to 61 seconds in duration. Additionally, the Mariner 1 Post Flight Review Board determined that the omission of a hyphen in coded computer instructions in the data-editing program allowed transmission of incorrect guidance signals to the spacecraft. During the periods the airborne beacon was inoperative the omission of the hyphen in the data-editing program caused the computer to incorrectly accept the sweep frequency of the ground receiver as it sought the vehicle beacon signal and combined this data with the tracking data sent to the remaining guidance computation. This caused the computer to swing automatically into a series of unnecessary course corrections with erroneous steering commands which finally threw the spacecraft off course.

The launch of Mariner 2 was successful. After launch and termination of the Agena first burn, the Agena-Mariner was in a 118 km altitude Earth parking orbit. The Agena second burn some 980 seconds later followed by Agena-Mariner separation injected the Mariner 2 spacecraft into a geocentric escape hyperbola at 26 minutes 3 seconds after lift-off. Solar panel extension was completed about 44 minutes after launch. On 29 August 1962 cruise science experiments were turned on. The midcourse maneuver was initiated at 22:49:00 UT on 4 September and completed at 2:45:25 UT 5 September. On 8 September at 17:50 UT the spacecraft suddenly lost its attitude control, which was restored by the gyroscopes 3 minutes later. The cause was unknown but may have been a collision with a small object. On October 31 the output from one solar panel deteriorated abruptly, and the science cruise instruments were turned off. A week later the panel resumed normal function and instruments were turned back on. The panel permanently failed on 15 November, but Mariner 2 was close enough to the Sun that one panel could supply adequate power. On December 14 the radiometers were turned on. Mariner 2 approached Venus from 30 degrees above the dark side of the planet, and passed below the planet at its closest distance of 34,773 km at 19:59:28 UT 14 December 1962. After encounter, cruise mode resumed. Spacecraft perihelion occurred on 27 December at a distance of 105,464,560 km. The last transmission from Mariner 2 was received on 3 January 1963 at 07:00 UT. Mariner 2 remains in heliocentric orbit.

Scientific discoveries made by Mariner 2 included a slow retrograde rotation rate for Venus, hot surface temperatures and high surface pressures, a predominantly carbon dioxide atmosphere, continuous cloud cover with a top altitude of about 60 km, and no detectable magnetic field. It was also shown that in interplanetary space the solar wind streams continuously and the cosmic dust density is much lower than the near-Earth region. Improved estimates of Venus' mass and the value of the astronomical unit were made.