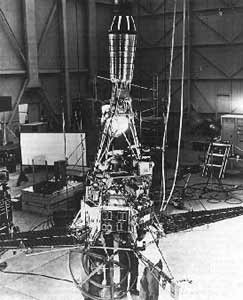 Ranger 1 was a spacecraft whose primary mission was to test the performance of those functions and parts necessary for carrying out subsequent lunar and planetary missions using essentially the same spacecraft design. A secondary objective was to study the nature of particles and fields in interplanetary space.

The spacecraft was of the Ranger Block 1 design and consisted of a hexagonal base 1.5 m across upon which was mounted a cone-shaped 4 m high tower of aluminum struts and braces. Two solar panel wings measuring 5.2 m from tip to tip extended from the base. A high-gain directional dish antenna was attached to the bottom of the base. Spacecraft experiments and other equipment were mounted on the base and tower. Instruments aboard the spacecraft included a Lyman-alpha telescope, a rubidium-vapor magnetometer, electrostatic analyzers, medium-energy range particle detectors, two triple coincidence telescopes, a cosmic-ray integrating ionization chamber, cosmic dust detectors, and solar X-ray scintillation counters.

The communications system included the high gain antenna and an omni-directional medium gain antenna and two transmitters, one at 960.1-MHz with 0.25 W power output and the other at 960.05-MHz with 3 W power output. Power was to be furnished by 8680 solar cells on the two panels, a 57 kg silver-zinc battery, and smaller batteries on some of the experiments. Attitude control was provided by a solid-state timing controller, Sun and Earth sensors, and pitch and roll jets. The temperature was controlled passively by gold plating, white paint, and polished aluminum surfaces.

The Ranger 1 spacecraft was designed to go into an Earth parking orbit and then into a 60,000 × 1,100,000 km Earth orbit to test systems and strategies for future lunar missions. Ranger 1 was launched into the Earth parking orbit as planned, but the Agena B failed to restart to put it into the higher trajectory, so when Ranger 1 separated from the Agena stage it went into a low Earth orbit and began tumbling. The satellite re-entered Earth's atmosphere on 30 August 1961. Ranger 1 was partially successful, much of the primary objective of flight testing the equipment was accomplished but little scientific data was returned.

The Ranger 2 spacecraft was launched into a low earth parking orbit, but an inoperative roll gyro prevented Agena restart. The spacecraft could not be put into its planned deep-space trajectory, resulting in Ranger 2 being stranded in low earth orbit upon separation from the Agena stage. The orbit decayed and the spacecraft reentered Earth's atmosphere on 20 November 1961.