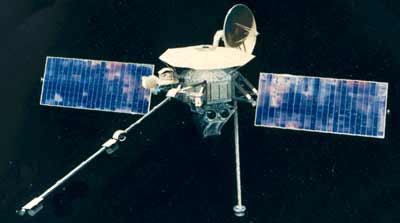 Mariner 10 was the seventh successful launch in the Mariner series and the first spacecraft to use the gravitational pull of one planet (Venus) to reach another (Mercury). The spacecraft flew by Mercury three times in a heliocentric orbit and returned images and data on the planet. Mariner 10 is the only spacecraft to have visited Mercury.

The spacecraft structure was an eight-sided framework with eight electronics compartments. It measured 1.39 m diagonally and 0.457 m in depth. Two solar panels, each 2.7 m long and 0.97 m wide, were attached at the top, supporting 5.1 sq m of solar cell area. The rocket engine was liquid-fueled, with two sets of reaction jets used to stabilize the spacecraft on three axes. It carried a low-gain omnidirectional antenna, composed of a honeycomb-disk parabolic reflector, 1.37 m in diameter, with focal length 55 cm. Feeds enabled the spacecraft to transmit at S- and X-band frequencies. The spacecraft carried a Canopus star tracker, located on the upper ring structure of the octagonal satellite, and acquisition sun sensors on the tips of the solar panels. The interior of the spacecraft was insulated with multilayer thermal blankets at top and bottom. A sunshade was deployed after launch to protect the spacecraft on the solar-oriented side.

Mariner 10 was placed in a parking orbit after launch for approximately 25 minutes, then placed in orbit around the Sun en route to Venus. The orbit direction was opposite to the motion of the Earth around the Sun. Mid-course corrections were made. The spacecraft passed Venus on 5 February 1974, at a distance of 4200 km. It crossed the orbit of Mercury on 29 March 1974, at 2046 UT, at a distance of about 704 km from the surface. The TV and UV experiments were turned on the comet Kohoutek while the spacecraft was on the way to Venus. A second encounter with Mercury, when more photographs were taken, occurred on 21 September 1974, at an altitude of about 47,000 km. A third and last Mercury encounter at an altitude of 327 km, with additional photography of about 300 photographs and magnetic field measurements occurred on 16 March 1975. Engineering tests were continued until 24 March 1975, when the supply of attitude-control gas was depleted and the mission was terminated.

Total research, development, launch, and support costs for the Mariner series of spacecraft (Mariners 1 through 10) was approximately $554 million.

A back-up probe named Mariner-K was built and stood ready on a "borrowed" Atlas Centaur launch vehicle, in case the Mariner 10 launch failed. This probe was later donated to the Smithsonian and the launch vehicle was used for its original purpose.