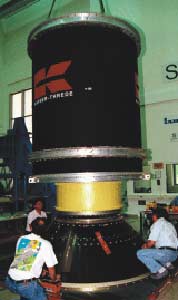 MaqSat 3 (Maquette Satellite 3) was a dumy satellite, which matches the mechanical properties and dynamical characteristics of the originally planned payload, the Eutelsat W2. A condition for the contract with the Munich-based space company Kayser-Threde called for the short delivery period of only three months. On September 1st, the dummy-structure with a mass of 2,600 kg and a length of more than 3 m was flown to Kourou, Europe's spaceport. Launch took place in 21 October 1998.

Due to the unavailability of the originally planned tele-communications satellite W2, Arianespace opted for the flight of a dummy payload. This third and last test flight of the new carrier Ariane 5 primarily aims at reaching GTO and at taking up commercial business with flight 504 as soon as possible.

During the development of MAQSAT 3, nine mechanical parameters have had to be adapted to the values of W2 within an extremely short time. In parallel, manufacture of the first parts has had to be started, with all activities running at maximum speed. After integration, a final modal test is planned.