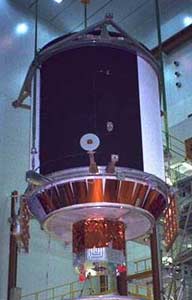 The ARIANE 502 payload consists of three components: The lower Instrumented Platform (MaqSat B), the upper Instrumented Payload (MaqSat H) and TEAMSAT (Technology education Experiment Added To MAQSat) (various experiments of European universities) which is added to MaqSat H. The platforms are developed, manufactured and tested by Kayser-Threde, Munich and correspond to about 90 % of the total payload mass.

MaqSat H, 2290 kg in mass including TEAMSAT, 5 m in height, will use 34 sensors to measure acceleration, vibration, shock and acoustic noise at different locations. On an instrumentation plate flight data (32 Mbyte) will be recorded within the first four minutes after ignition. Immediately afterwards, the data will be transmitted down to Kourou within the following 4 minutes. The MAQSATH structure itself, including a simulating solar panel, will fulfill various frequency and stiffness requirements and has the dimensions of a typical large communications satellite. The evaluation of the flight data will result in understanding and validity of the environment requirements for future satellites launched on Ariane-5G.

After injection into GTO, MAQSAT-H was jettisoned. Afterwards, the ESA experiment TEAMSAT began to operate. TEAMSAT ejected later the YES subsatellite, which was originally a tethered experiment, but for security reasons, the tether was not used.

The five experiments comprising the 350 kg TEAMSAT payload are: