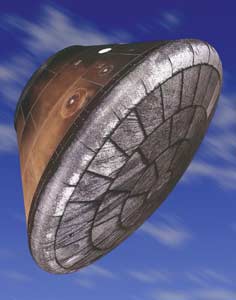 ARD (Advanced Reentry Demonstrator) was a suborbital reentry test flown on the third Ariane-5G flight. ARD was released during the Ariane 503 flight on 21 October, shortly after separation of the launcher's cryogenic main stage (at an altitude of about 216 km) 12 minutes after lift-off from the Guiana Space Centre, Europe's spaceport in Kourou, French Guiana.

ARD reached an altitude of 830 km and splashed down to within 4.9 km of its target point in the Pacific Ocean between the Marquises and Hawaii after one hour and 41 minutes. It was recovered some five hours later and underwent more detailed technical analysis in Europe. Engineers analysing data from its sub-orbital flight reported that all the capsule's systems had performed well and according to expectations. Engineers analysing real-time telemetry from the flight have reported that all electrical equipment and propulsion systems functioned nominally. Telemetry systems and reception stations all performed well, and the onboard GPS receiver worked satisfactorily during the entire flight except, as expected, during black-out in reentry.

During reentry the heatshield temperature reached 900°C and the cone and heatshield thermal protection was in a perfect state after retrieval. Throughout the flight ARD remained airtight and perfectly intact.

Built by Aerospatiale (France) for ESA, the ARD has a classical Apollo capsule design and is packed with the most advanced technologies to test and qualify new technologies and flight control capabilities for atmospheric reentry and landing. During the mission it recorded and transmitted to the ground more than 200 critical parameters for analysis of the flight and behaviour of onboard equipment.