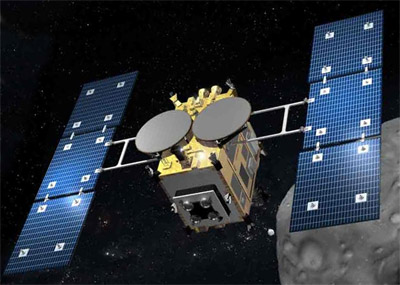 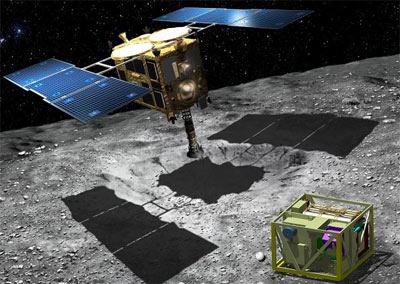 Hayabusa-2 is a follow-on mission to the similar MUSES-C (Hayabusa) mission that will return samples of surface from an asteroid to the earth. Target asteroid, however, is different. Asteroid Itokawa explored by Hayabusa is rock-rich S-type one. Asteroid that Hayabusa-2 will visit at is a C-type asteroid. C-type asteroids are also rocky, but it is thought that their rocks contain much more organic matters.

The objectives of the Hayabusa-2 mission are:

The asteroid selected as a target of Hayabusa-2 is Asteroid (162173) Ryugu (1999 JU3). Observation of spectrum of sunlight reflected by the asteroid shows that it has features of C-type.

Hayabusa-2 will fly to the target asteroid by using ion engines as with Hayabusa. The spacecraft is almost the same as Hayabusa, but problematic points discovered during the Hayabusa mission will be corrected. The antenna type will be also different. Hayabusa-2 will use a dual planar antenna (X- and Ku-band) in place of the parabolic one of Hayabusa.

A new device carried by the mission is SCI (Small Carry-on Impactor), a small drop-off Explosively formed penetrator. The shaped charge will consist of 4.5 kg of plasticized HMX and a 2.5 kg copper liner. The explosion will form a copper penetrator hitting the asteroid with a velocity of 2 km/s. The crater formed by the impact will allow further observations by the onboard instruments. SCI will be deployed bay Hayabusa-2 near the surface. The low gravity allows Hayabusa-2 enough time to maneuver on to the opposite side of the asteroid to be protected by the explosion and the impact. To observe the explosion and the impact, the DCAM-3 deployable camera subsatellite is also deployed. It is similar to the DCAM subsatellites deployed by IKAROS.