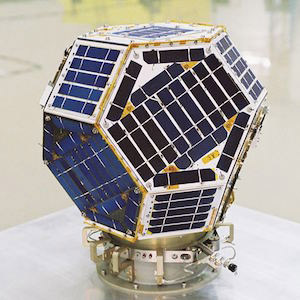 Shin'en 2 is a interplanetary satellite built by students at Kyushu Institute of Technology and Kagoshima University, AUT in Japan that carries a 145 to 435 MHz linear transponder into a deep space heliocentric orbit.

The 15 kg spacecraft, measuring 490 × 490 × 475 mm, features a lightwight thermoplastic CFRP structure. It is powered by solar cells on the polyheadral surface of the satellite body. Shin'en 2 will orbit the Sun in an elliptic orbit between Venus and Mars. Its inclination will be almost zero, which means Shin'en 2 will stay in the Earths equatorial plane. The distance from the Sun will be between 0.7 and 1.3 AU.

The goals of the mission are:

Shin'en 2 is planned to launch in the 4th quarter of 2014 on an H-2A-202 rocket with Hayabusa 2 as the main payload and PROCYON and ARTSAT2:DESPATCH as secondary payloads.

After launch, Shin'en 2 got the additional designation Fuji OSCAR 82 (FO 82).