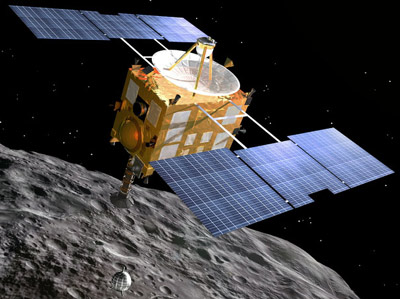 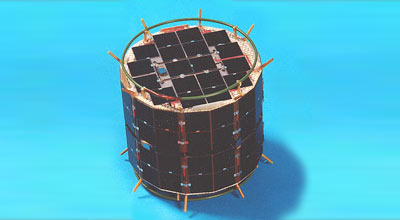 MUSES-C (renamed Hayabusa after launch) is a sample return mission to the asteroid. Its primary goal is to acquire and verify technology which is necessary to retrieve samples from a small body in the solar system and to bring back them to the earth. The MUSES-C spacecraft is equipped with solar powered electrical propulsion system, and autonomous navigation and guidance system. The spacecraft will rendezvous with asteroid (25143) Itokawa (formerly 1998 SF36), touch down and take some amount of samples.

The spacecraft will carry a horn that will be brought up to the asteroid surface as MUSES-C makes a close approach. A small pyrotechnic charge will then fire a bullet into the surface and fragments of the impact will be captured by the horn and funnelled into a sample container. The system will try performing several sample extractions from several different locations to obtain a mix of data and to maximize the scientific return. On each of the sampling attempts, the spacecraft will begin its approach at some distance from the asteroid, move in to collect the sample, and then return back to the same distance. The time for each of the contacts with the asteroid surface is planned to be on the order of 1 second and the sample collector system is designed to comply with to every kind of surface composition. The samples are transferred into a small reentry capsule, which will return to earth at the end of the mission.

MUSES-C carried also the tiny MINERVA (Micro/Nano Experimental Robot Vehicle for Asteroid) hopping lander ("rover"), which was lost after deployment and drifted away into space.