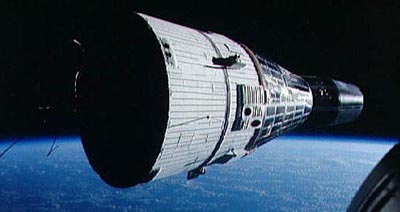 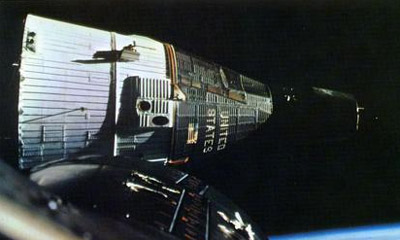 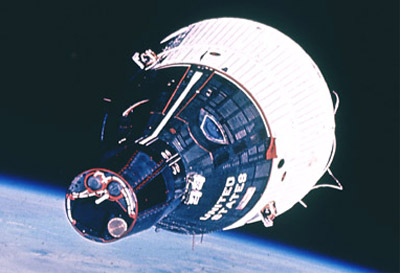 The Gemini program was designed as a bridge between the Mercury and Apollo programs, primarily to test equipment and mission procedures in Earth orbit and to train astronauts and ground crews for future Apollo missions. The general objectives of the program included: long duration flights in excess of of the requirements of a lunar landing mission; rendezvous and docking of two vehicles in Earth orbit; the development of operational proficiency of both flight and ground crews; the conduct of experiments in space; extravehicular operations; active control of reentry flight path to achieve a precise landing point; and onboard orbital navigation. Each Gemini mission carried two astronauts into Earth orbit for periods ranging from 5 hours to 14 days. The program consisted of 10 crewed launches, 2 uncrewed launches, and 7 target vehicles, at a total cost of approximately 1,280 million dollars.

After the prototype Gemini 1, which lacked most of the systems of the Gemini spacecraft, beginning with Gemini 2 the complete Gemini capsule was flown.

The reentry module consisted mainly of the pressurized cabin which held the two Gemini astronauts. Separating the reentry module from the retrorocket section of the adaptor at its base was a curved silicone elastomer ablative heat shield. The module was composed predominantly of titanium and nickle-alloy with beryllium shingles. At the narrow top of the module was the cylindrical reentry control system section and above this the rendezvous and recovery section which holds the reentry parachutes. The cabin held two seats equipped with emergency ejection devices, instrument panels, life support equipment, and equipment stowage compartments in a total pressurized volume of about 2.25 cubic meters. Two large hatches with small windows could be opened outward, one positioned above each seat.

Attitude control was effected by two translation-maneuver hand controllers, an attitude controller, redundant horizon sensor sytems, and reentry control electronics, with guidance provided via an inertial measuring unit and radar system. The orbital attitude and maneuver system used a hypergolic propellant combination of monomethylhydrazine and nitrogen tetroxide supplied to the engines by a helium system pressurized at 2800 psi. Two 95 lb translation thrusters and eight 23 lb attitude thrusters were mounted along the bottom rim of the adaptor, and two 79 lb and 4 95 lb thrusters were mounted at the front of the adaptor. Power was supplied by 3 silver-zinc batteries to a 22- to 30-volt DC two-wire system. During reentry and post-landing power was supplied by four 45 amp-hr silver-zinc batteries.

Voice communications were performed at 296.9 MHz with an output power of 3 W. A backup transmitter-receiver at 15.016 MHz with an output power of 5 W was also available. Two antenna systems consisting of quarter-wave monopoles were used. Telemetry was transmitted via three systems, one for real time telemetry, one for recorder playback, and a spare. Each system was frequency-modulated with a minimum power of 2 W. Spacecraft tracking consisted of two C-band radar transponders and an acquisition-aid beacon. One transponder is mounted in the adaptor with a peak power output of 600 W to a slot antenna on the bottom of the adaptor. The other is in the reentry section, delivering 1000 W to three helical antennas mounted at 120 degree intervals just forward of the hatches. The acquisition-aid beacon was mounted on the adaptor and had a power of 250 mW.

At the time of reentry, the spacecraft would be maneuvered to the appropriate orientation and equipment adaptor section would be detached and jettisoned, exposing the retro rocket module. The retro rockets consisted of four spherical-case polysulfide ammonium perchlorate solid-propellant motors (Star-13E (TE-M-385)) mounted near the center of the reentry adaptor module, each with 11,070 N thrust. They would fire fired sequentially at 5.5 second intervals to initiate the spacecraft reentry into the atmosphere, with attitude being maintained by a reentry control system of 16 engines, each with 5.2 N thrust. The retrorockets could also be salvo fired in conjunction with a launch abort scenario above 15,000 feet to separate the spacecraft from the Titan II Launch vehicle. The retrorocket module would then be jettisonned, exposing the heat shield at the base of the reentry module. Along with the ablative heat shield, thermal protection during reentry was provided by thin Rene 41 radiative shingles at the base of the module and beryllium shingles at the top. Beneath the shingles was a layer of MIN-K insulation and thermoflex blankets. At an altitude of roughly 15,000 meters the astronauts would deploy a 2.4 meter drogue chute from the rendezvous and recovery section. At 3230 meters altitude the crew releases the drogue which extracts the 5.5 meter pilot parachute. The rendezvous and recovery section is released 2.5 seconds later, deploying the 25.6 meter main ring-sail parachute which is stored in the bottom of the section. The spacecraft is then rotated from a nose-up to a 35 degree angle for water landing. At this point a recovery beacon is activated, transmitting via an HF whip antenna mounted near the front of the reentry module.