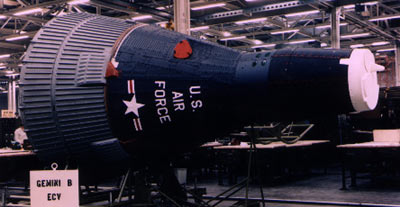 NASA's Gemini capsule was extensively redesigned for the MOL Manned Orbiting Laboratory program. The resulting Gemini B, although externally similar, was essentially a completely new spacecraft. Gemini B was not designed to fly separately, but rather was launched with the crew aboard attached to the manned orbiting laboratory. After reaching orbit, the crew would shut down the capsules systems and put them into hibernation. They would crawl through an 0.635 m diameter hatch in the heat shield, leading to a tunnel that accessed the MOL itself. After thirty days of operations, the crew would return to the Gemini B, separate from the MOL, and reenter the atmosphere. Gemini B had only 14 hours of free flight time for autonomous operations after separation from the MOL.

Several changes were made from the original NASA Gemini, including:

The prototype Gemini-B, which was launched on a suborbital trajectory, was the refurbished Gemini-2 capsule, making it the first reused spacecraft. It was launched with the MOL-Heatshield Qualification Test on a Titan-3C launch vehicle.