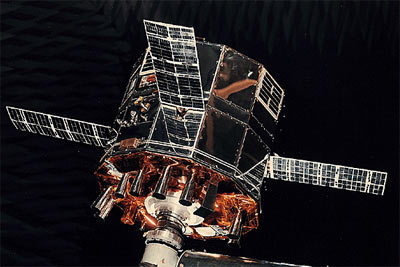 Solrad 10 or SE C or Explorer 44, a spin-stabilized satellite, was one of the Solrad series designed to provide continuous coverage of wavelength and intensity changes in solar radiation in the UV, soft, and hard X-ray regions. Solrad 10 also mapped the celestial sphere using a high-sensitivity X-ray detector.

The spacecraft was a 12-sided cylinder that measured 76 cm in diameter and 58 cm in height. Four symmetrically placed 17.8-by 53.3-cm solar cell panels, hinged at the central section of the structure, served as the elements of a turnstile antenna system. Eighteen solar sensors were mounted pointing parallel to the spin axis of the satellite, which pointed directly at the solar disk. The plane of rotation shifted about 1 deg/day so that a stellar detector mounted to point radially outward from the axis scanned the celestial sphere. Data from all detectors were stored in a 54-kbs core memory and telemetered on command to the NRL tracking station at Blossom Point, MD. Data were also transmitted in real time at 137.710 MHz.