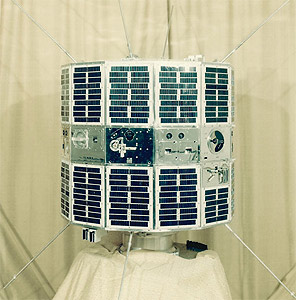 The NRL built Solrad 9 or Explorer 37 satellite was one of the Solrad series that began in 1960 to provide continuous coverage of solar radiation with a set of standard photometers.

Solrad 9 was a spin-stabilized satellite oriented with its spin axis perpendicular to the sun-satellite line so that the 14 solar X-ray and UV photometers pointing radially outward from its equatorial belt viewed the sun with each revolution. Data were simultaneously transmitted via FM/AM telemetry and recorded in a core memory that read out its contents on command. Individual scientists and institutions were invited to receive and use the data transmitted on the 136 MHz telemetry band on the standard IRIG channels 3 through 8.