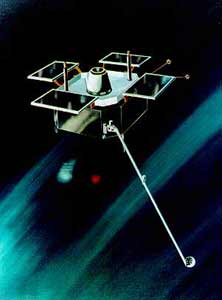 The CCE (Charge Composition Explorer) spacecraft was instrumented to detect those lithium and barium tracer ions from the IRM released that were transported into the magnetosphere within the CCE orbit. The spacecraft was spin-stabilized at 10 rpm, with its spin axis in the equatorial plane, and offset from the earth-sun line by about 20 degrees. It could adjust attitude with both magnetic torqueing and cold gas thrusters. Five instruments were mounted on the CCE spacecraft: