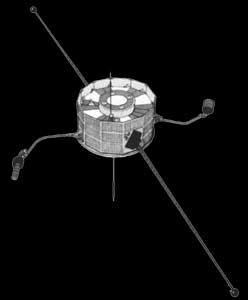 The UKS (United Kingdom Subsatellite) served as a subsatellite of the IRM spacecraft. Its purpose was to help distinguish between spatial structure and temporal changes in the plasma phenomena initiated by ion releases from the IRM and in the natural magnetospheric environment. Measured quantities were similar to those of the IRM and include magnetic fields, positive ions, electrons, plasma waves, and modulations in ions and electrons. The spacecraft was spin-stabilized at 12 rpm and employed S-band communications. It carried a cold gas propulsion system and a VHF radar system for station keeping with the IRM normally at a distance of a few hundred kilometers. The spacecraft power supply failed on 15 January 1985.

Following instruments were onboard: