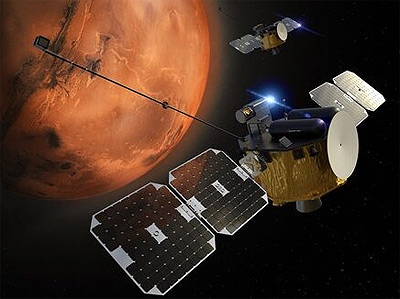 EscaPADE (Escape and Plasma Acceleration and Dynamics Explorers) by the University of California, Berkeley, is a twin-spacecraft Mars orbiter mission to study the structure, composition, variability and dynamics of Mars magnetosphere and atmospheric escape processes.

There are three science experiments onboard each spacecraft:

The twin spacecraft were originally to travel to Mars via solar electric propulsion as a rideshare with the Psyche metal-asteroid mission in August 2022, matching Mars heliocentric orbit until capture and spiral-down to science orbits.

Following an 11-month interplanetary cruise, the two Photon based satellites (named Blue and Gold) will insert themselves into elliptical orbits around Mars and conduct a 1-year primary science mission. ESCAPADEs Photons will use the flight-proven Curie propulsion system to perform Mars orbit insertion and will be equipped with other subsystems that enable planetary science, including star trackers and reaction wheels for precision pointing from Rocket Labs Sinclair Interplanetary team, as well as ranging transceivers for deep space navigation.

The two spaceprobes were originally to be launched in 2022 as secondary payloads on a Falcon-Heavy (Block 5)(px) together with the Psyche and Janus missions. In September 2020 EscaPADE was removed from this launch, due to trouble getting the trajectory needs of all three passengers to work out together and EscaPADE would need to be redesigned with a larger propulsion system. EscaPADE will be re-manifested on an other launch.

Following the demanifest, the ESCAPADE mission was redesigned to be built on Rocket Lab's Photon bus. The two spacecraft are planned for launch in 2024 to Mars ridesharing aboard a NASA-provided commercial launch vehicle.