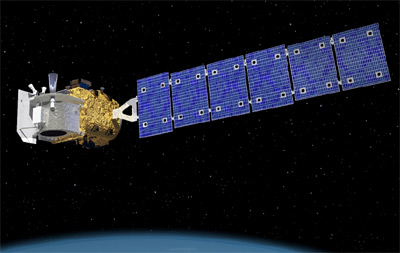 ICESAT 2 (Ice, Cloud & Land Elevation Satellite 2) is Earth science satellite to measure the polar ice-sheets. Launched in 2018, ICESAT-2 is the next-generation successor to the original ICESAT satellite, which operated from 2003 to 2010.

NASA selected Orbital to be responsible for the design and fabrication of the ICESAT-2 spacecraft bus, integration of the government-furnished instrument, satellite-level testing, on-orbit satellite check-out, and continuing on-orbit engineering support. It will be based on the LEOStar-3 platform.

ICESAT-2 will use precision laser-ranging techniques to measure the topography of the Greenland and Antarctic ice sheets and the thickness of sea ice. The mission was recommended by the National Research Council in its 2007 decadal survey of NASA Earth science research priorities. ICESAT-2 supports NASA's Earth science program by helping scientists develop a better scientific understanding of the Earth system and its response to natural or human-induced changes.

From 2003 to 2010, the original ICESAT mission provided multi-year elevation data needed to determine ice sheet mass balances as well as cloud property information, especially for stratospheric clouds common over polar areas. It also provided topography and vegetation data around the globe, in addition to polar-specific coverage over the Greenland and Antarctic ice sheets. The next-generation program, ICESAT-2 will continue the scientific data collection with these specific objectives:

In contrast to the ICESAT design, ICESAT-2 will use a micro-pulse multi-beam approach. This provides dense cross-track sampling to resolve surface slope on an orbit basis. The sensor called Advanced Topographic Laser Altimeter System (ATLAS) will have a high pulse repetition rate of 10 kHz (exact number still TBD) which generates dense along-track sampling of about 70 cm.