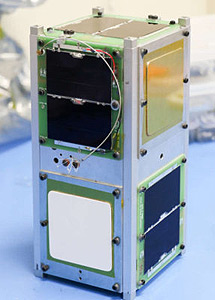 The SurfSat (Surface charging Satellite) is a 2U CubeSat mission developed at the University of Central Florida (UCF) to measure plasma induced surface charging and electrostatic discharge.

It will take in-situ measurements of the ground current waveforms from chosen common spacecraft dielectric material samples, measure the spacecraft and material potentials, and will use a Langmuir probe system to measure the ambient plasma environment.

Spacecraft in low-earth orbits, including both Geosynchronous and Polar orbits, are likely to experience charging issues due to the ambient plasma environment. The space radiation environment in Earths atmosphere is filled with hot and low-density plasmas that can cause charge to build up on spacecraft surfaces, resulting in high differential voltages and subsequent electrostatic discharges. If the exposed spacecraft materials are not properly bonded, differential charging can occur which can result in unwanted and damaging electrostatic discharge events.

It was selected in 2015 by NASA's CubeSat Launch Initiative (CSLI) to be launched as part of the ELaNa program. It was launched on the ELaNa-18 mission.