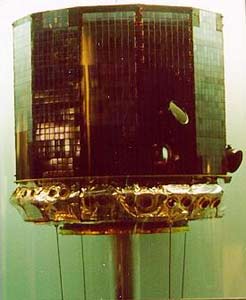 DSAP-4B (Defense Satellite Application Program Block 4B) was the sixth version of the military meteorological satellites of the Defense Meteorological Satellite Program.

The DSAP-4B satellites, slightly larger than their predecessors, was 30 inches in diameter, 29 inches high, and weighed 175 pounds. Still spin-stabilized, the satellite nonetheless provided improved weather coverage. They were a slightly improved version of the Block 4a satellite.

Previously, the single 1/2-inch focal length RCA vidicon television camera in Block 1 and Block 2 satellites furnished a nadir resolution of 3-to-4 nautical miles (nm) over an 800 nm swath, with significant gaps in coverage of the Earth at the equator. Block 4 vehicles carried two one-inch focal length vidicons canted at 26 degrees from the vertical that provided global coverage of the Earth (contiguous coverage at the equator), along a 1,500 nm swath. The resolution varied from 0.8 nm at the nadir to 3 nm at the picture's edge. Besides a multi-sensor infrared subsystem, Block 4 also incorporated a high resolution radiometer that furnished cloud-height profiles. A tape recorder of increased capacity stored pictures of the entire northern hemisphere each day, while the satellite furnished real-time, direct local tactical weather coverage to small mobile ground or shipboard terminals.

One additional DMSP Block 4B satellite was manufactured, but not launched. The satellite, also known as 4B-4, was donated to the Chicago Museum of Science and Industry.

The designation DMSP-4B (Defense Meteorological Satellite Program Block 4B) was retroactively assigned to these satellites.