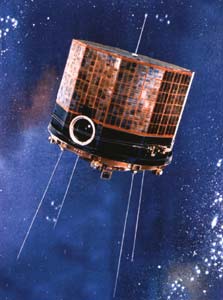 The DSAP-1 (Defense Satellite Application Program Block 1) satellites series, also known as P-35, was the first series of military meteorologal satellites of the USA. The project designation P-698BH was used concurrently with P-35 from June 1962 and P-35 became P-417 in October 1962.

Smaller and lighter than the original TIROS, the 100-pound TIROS-derived RCA satellite was shaped like a 10-sided polyhedron, 23-inches across and 21-inches high. A spinning motion, introduced on injection into orbit, was maintained on the early NRO weather satellites at about 12 rpm by small spin rockets. The spin axis was maintained perpendicular to the orbit plane by torquing the satellite against the Earth's magnetic field, the forces supplied through a direct-current loop around the satellite's perimeter. A ground command would cause the electric current to flow in the desired direction to generate the torque.

If it operated correctly, the RCA shuttered television camera (a photosensitive vidicon tube) would be pointed directly at the Earth once each time the satellite rotated. At the programmed interval, when infrared horizon sensors indicated the lens was vertical to the Earth, the vidicon would take a picture of an 800-mile-square area of the surface below, with the image recorded on tape as an analog signal for later transmission to the ground. Launched into a sun-synchronous 450 nautical mile circular polar orbit, the RCA television system would provide 100 percent daily coverage of the Northern Hemisphere at latitudes above 60 degrees, and 55 percent coverage at the equator. Readout of the tape-recorded pictures was planned to occur on each pass over the western hemisphere; at the ground stations, the video pictures of cloud cover over the Eurasian landmass would be relayed to the Air Weather Service's Air Force Global Weather Central collocated with Headquarters Strategic Air Command at Offutt AFB, near Omaha, Nebraska.

Intially NASA provided Scout launch vehicles with the MG-18 upper stage (Scout-X2M, Scout-X3M) were to launch the DSAP-1 satellites. After three of the five Scout launches had failed to place the satellite into orbit, the Scout booster was dropped from the program. As an interim solution, two Thor-DM21 Agena-D were purchased, which could place two DSAP-1 satellites into orbit on each launch. For later missions, the Thor-DSV2S Burner-1 (1) rocket was employed, which combined no longer used Thor IRBM missiles with the MG-18 motor and the fairing of the Scout vehicle.