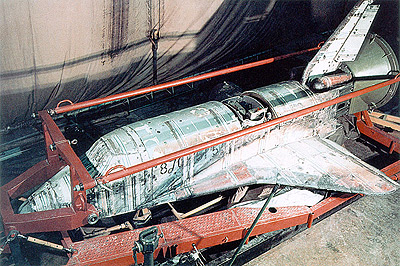 The BOR-5 (Bespilotniye Orbitalniye Raketoplan) was a 1:8 sized test vehicle for the Buran space shutte.

BOR-5 was used to study the main aerodynamic, thermal, acoustic and stability characteristics of the Buran. Five of these vehicles were built and flown. They were put into a suborbital trajectory by K65M-RB5 rockets launched from Kapustin Yar. After reaching a height of 210 km and following reentry, they landed in Lake Balkhash to be recovered.