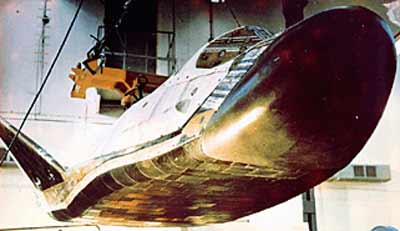 In 1973 the VPK initiated the BOR (Bespilotniye Orbitalniye Raketoplan) program to investigate the hypersonic aerodynamic characteristics of lifting-body and heat shield materials for the crewed Spiral lifting body spacecraft.

1:3 and 1:2 subscale models of the Spiral were built, which had, unlike the full-scale model, fixed wings and were designated BOR (unpiloted orbital rocketplane). BOR-1, BOR-2, and BOR-3 were increasingly sophisticated models of the configuration, flown on suborbital trajectories.

After the cancellation of Spiral in favour of the Buran, BOR-4 subscale spaceplanes were used to test heat shield materials developed for Buran. Certain essential tests of these heat shield materials could not be done in the lab. These included interaction with the plasma sheath during re-entry, chemical disassociation effects, etc. The BOR-4 was clad in 118 tiles of the type developed for Buran as well as carbon-carbon nose cap and leading edge.

As the BOR-4 were intended for orbital flight, they featured braking engines for deorbiting. After only one orbit of the earth, the spacecraft would deorbit, perform a gliding re-entry, followed by parachute deployment, splashdown in the ocean, and recovery by Soviet naval forces. A total of seven BOR-4 were built. Of these one flew a suborbital mission and four performed successful orbital test flights. These flights examinated the vehicle during reentry at speeds of from Mach 3 to 25 and altitudes of 30 to 100 km.

The BOR-4 gathered useful material and environmental data for the Buran orbiter program.