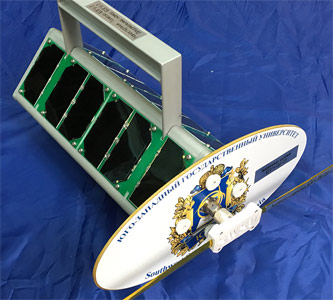 The Tanyusha-YuZGU 1 and 2 (also Tanyusha-SWSU 1 and 2 or Tanyusha 1 and 2), also known as RadioSkaf RS-6 and 7, are two small Russian experimental satellite, which were deployed from the ISS during a spacewalk. They were developed at the Southwestern State University (SWSU, YuZGU), Kursk.

The satellites were constructed using a 3D printer for the structure. Although the satellites are based on the 3U Cubesat standard, they will not be released using a deployer, but will be released by a kosmonaut during a spacewalk. Therefore they are fitted with a handle. The payload consists of an experiment to achieve self-organization of autonomous vehicles to assess the possibility of including in the grouping more satellites. The secondary objective is to measure density of the vacuum via the vacuum gauge developed at SWSU.

They were launched onboard of Progress-MS 06 to the ISS. They were deployed by hand during a spacewalk (EVA) in the aft-nadir direction from ISS.

A second pair, Tanyusha-YuZGU 3 and 4 (also Tanyusha-SWSU 3 and 4 or Tanyusha 3 and 4), was launched onboard of Progress-MS 08 to the ISS. They were deployed on 15 August 2018 during a spacewalk.