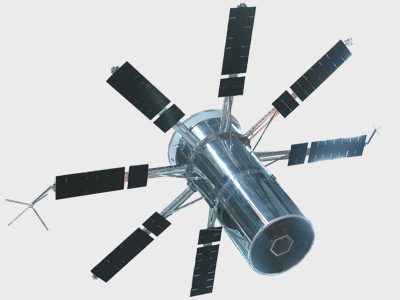 The AOSO (Advanced Orbiting Solar Observatory) satellite, which was originally called Helios, was intended as a scaled-up extension of the OSO (Orbiting Solar Observatory) series. It was conceived as a free-flying uncrewed polar-orbiting satellite system capable of continuously monitoring the sun and near solar environment using an array of detectors and electronic imaging devices covering a broad frequency band from the x-ray to the visual range. The first AOSO was to be launched in 1969 by a Thrust-augmented Thor Agena-D from Vandenberg. The AOSO program was cancelled in 1965 and a "Final" full-scale mock up was transferred to the Smithsonian in 1969. Many of the scientific instruments planned for AOSO eventually were developed for the Skylab Apollo Telescope Mount, which flew in 1973.

AOSO was intended to produce high resolution images of the solar photosphere and atmosphere in a wide range of wavelength regions. A pointing accuracy of +/-5 seconds of arc on the center of the solar disk and an overall system reliability of at least 70 percent was called for. AOSO's specifications, together with the higher spatial resolution of its larger telescopes, would allow for the detailed study of the emergence and development of individual solar flares and other localized solar photospheric and atmospheric phenomena. Budgeted at some $167 million dollars, OSSA hoped for a series of at least four AOSO flights through 1971 that would examine the sun during a peak period of the 11-year solar activity cycle.

In October 1963 Goddard Space Flight Center negotiated a $5 million dollar Phase I contract with Republic Aviation Corporation of Farmingdale, NY, for a one-year systems engineering development study as well as detailed design of the satellite). AOSO Conceptual and engineering design studies had been completed by mid-1965 and contracts for prototypes were in the process of negotiation when NASA, and OSSA in particular, suffered deep budget cuts during the 1965 budget request cycle for FY 1967 funding. AOSO was cancelled that year.

Following instruments were planned for AOSO: