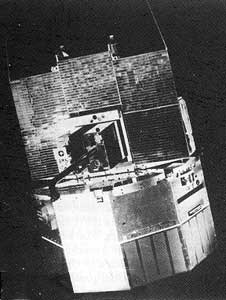 The objectives of the OSO (Orbital Solar Observatory) satellite series were to perform solar physics experiments above the atmosphere during a complete solar cycle and to map the entire celestial sphere for direction and intensity of UV light and X-ray and gamma radiation.

The OSO 7 platform consisted of a sail section, which pointed two experiments continually toward the sun, and a wheel section, which spun about an axis perpendicular to the pointing direction of the sail and carried four experiments. Attitude adjustment was performed by gas jets and a magnetic torquing coil. A pointing control permitted the pointed experiments to scan the region of the solar disk in a 60- by 60-arc-min raster pattern. In addition, the pointed section could be commanded to select and scan any 7.5- by 5-arc-min region near the solar disk. Data were simultaneously recorded on tape and transmitted by PCM/PM telemetry. A command system provided for at least 155 ground-based commands.

Only real-time data have been received since May 1973, when the second tape recorder failed. The spacecraft reentered the earth's atmosphere 9 July 1974.