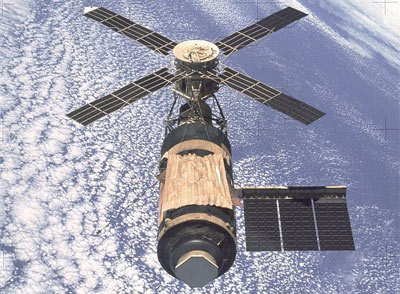 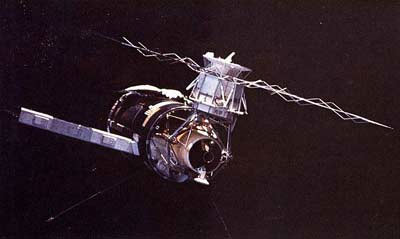 The Skylab (SL) was a crewed, orbiting space station composed of five parts, the Apollo telescope mount (ATM), the multiple docking adapter (MDA), the airlock module (AM), the instrument unit (IU), and the orbital workshop (OWS).

Skylab was in the form of a cylinder, with the ATM being positioned 90 deg from the longitudinal axis after insertion into orbit. The ATM was a solar observatory, and it provided attitude control and experiment pointing for the rest of the cluster. It was attached to the MDA and AM at one end of the OWS. The retrieval and installation of film used in the ATM was accomplished by astronauts during extravehicular activity (EVA). The ATM contained several solar observation instruments originally developed for the cancelled AOSO satellites.

The MDA served as a dock for the Apollo command and service modules, which served as personnel taxis to the Skylab. It provided two docking ports, although only one was ever used.

The AM provided an airlock between the MDA and the OWS, and contained controls and instrumentation.

The IU, which was used only during launch and the initial phases of operation, provided guidance and sequencing functions for the initial deployment of the ATM, solar arrays, etc.

The OWS was a actually the refitted S-IVB second stage of a Saturn-1B booster (from the AS-212 vehicle) suitable for long duration crewed habitation in orbit. It contained provisions and crew quarters necessary to support three-person crews for periods of up to 84 days each. All parts were also capable of uncrewed, in-orbit storage, reactivation, and reuse.

Skylab itself was launched on May 14, 1973 by a modified, two stage Saturn-5. During the launch, the station was damaged, as a heatshield and one solar wing fell off. The other solar wing remained jammed. In orbit, only the solar arrays of the ATM provided energy.

Following the last mission the Station was positioned in a parking orbit expected to last at least 8 years. It was planned to use the second shuttle mission to add a propulsion module to Skylab. Increased solar activity heating the outer layers of the earth's atmosphere and thereby increasing drag on the Station led to an early uncontrolled reentry on 11 July 1979 over Western Australia and the Indian Ocean, casting large pieces of debris in populated areas.

Two flight-qualified Skylabs were built, the second, Skylab B, a backup, is now on display at the National Air and Space Museum in Washington, DC. Following the damage sustained during the first launch, it was considered to launch the back up.