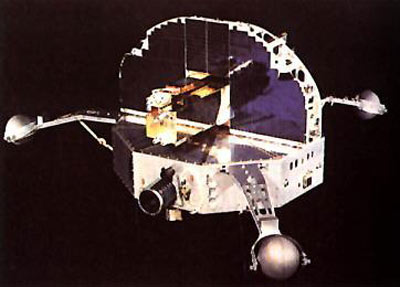 The Mission of the OSO (Orbital Solar Observatory) satellites was to return data on the ultraviolet, X-ray and gamma ray emissions of the sun and galaxy.

OSO featured a dual-spin design that permitted various instruments of the payload to be pointed accurately at the sun while others scanned the galaxy for scientific data.

Sun sensors connected to servo-feedback systems on the upper "sail" portion were designed to keep the pointed instruments (75 pound payload) to within ±1 minute of arc on the center of the sun. The lower spinning portion carried some 100 pounds of instruments and rotated once every two seconds, allowing those instruments to scan the solar disk and atmosphere. The OSO had three protruding arms that extended after deployment which gave the system greater axial stability. Among many observations by the battery of instruments on OSO was that the sun's corona had openings, now called coronal holes, which were interpreted as huge fast-moving bubbles rising through the corona.

On 14 April 1964 OSO-B was destroyed in a pre-launch explosion that killed three technicians. A prototype reworked under an accelerated refurbishing program was begun and OSO-B2 was built using some of the components salvaged from OSO-B and other available hardware. It was launched successfully as OSO-2 in February 1965 and made some observations, but an electrical error destroyed the instruments mounted on the sail, ending the mission. OSO-C was also destroyed in August 1965 when its launch rocket malfunctioned. In September of 1965, it was decided to modify the OSO-E spacecraft, then in production, to accommodate the OSO-C flight-spare experiments. The modified OSO-E, renamed OSO-E1, was developed under an accelerated program.