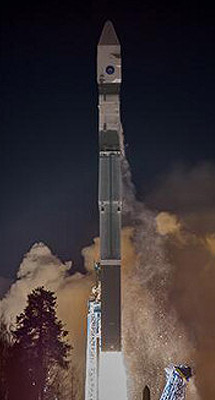 The Soyuz-2-1v (formerly called Soyuz-1) is a lightweight derivative of the Soyuz launch vehicle. It ommits the four strap-on boosters and features a modified core. While originally the core with a NK-33-1 engine was planned, the core had to modified to a larger diameter, when the development of the NK-33-1 was cancelled and replaced with a NK-33A and an additional RD-0110 vernier engine.

The Volga upper stage is built by TsSKB in Samara. This fourth stage is derived from the Ikar upper stage, which was in turn an existing flight-proven module that has been used as a propulsion module of Yantar type satellites.

The first flight was made in late 2013 from Plesetsk.