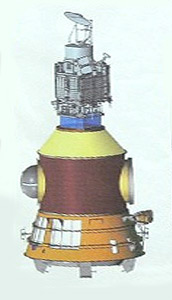 The russian KYuA 1 satellite is a radar calibration spheres, which was launched on the second flight of the Soyuz-2-1v Volga launch vehicle.

The KYuA 1 radar calibration sphere is to be used for radar tests by the Almaz-Antey company, a developer of anti-aircraft and anti-missile systems.

The sphere is side-mounted on a large cylindrical adaptor, which carries the Kanopus-ST 1 main satellite. It resembles the SKRL-756 radar calibration spheres of the maiden Soyuz-2-1v Volga launch.