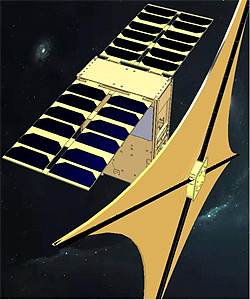 The satellite is built to the 6U CubeSat form factor. It features a solar sail, which was successfully deployed.

The solar sail developed by the institute of the Chinese Academy of Sciences based in Northeast China's Liaoning province is a spacecraft powered by the reflected light pressure of the sun on the spacecraft's membrane. Because it does not consume additional chemical fuel, a solar sail is considered to be the one and only spacecraft that may reach outside the solar system. It can be applied to a wide range of fields, including asteroid exploration, geomagnetic storm monitoring, solar polar exploration and space debris removal. After the satellite platform is put into orbit, scientists carry out technical verification through two-stage deployment. At the first stage, the solar sail body is pushed out of the satellite platform and turned 90 degrees. The second stage is to erect masts and gradually spread the sail. The unfolded solar sail is about 0.6 square meters, which is equivalent to the size of eight Macbook airs laptop computers.

The satellite was launched in October 2018 as a co-passenger to Taizhi 1 (KX 09) on a Kuaizhou-1A rocket.