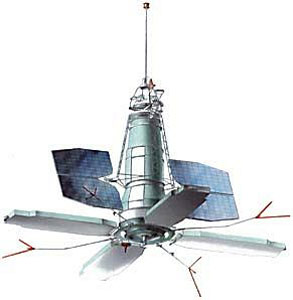 Development began during the 1960's, leading to a first launch in 1970. TsNII-108 GKRE (Zaslavskiy) developed the payload while V M Kovtunenko of Yuzhnoye/OKB-586 build the satellite and launch vehicle. Continuing problems prevented the system from becoming operational before 1976.

After the retirement of the Tselina-O component, Tselina-D took over the general ELINT surveillance function in 1984. The final launch attempt in the series took place in 1994, when Tselina-D was replaced by the improved Tselina-2 satellites, which were launched since the mid 1980ies.

Tselina-D and -O spacecraft were operated simultaneously to provide surveillance and detailed observation and classification of radio emitters. Recorded data was stored on board and dumped to groundstations in the USSR.

Western observers of the Kettering Group were able to monitor the status of the Tselina-D satellites via their continuous-wave beacons which operated at 153 MHz.