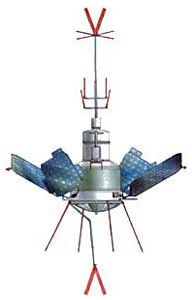 The Tselina-O (11F616) was one component of two-satellite Tselina ELINT satellite system. Tselina-O provided general ELINT surveillance to be examined in detail by the larger Tselina-D satellites.

Development began during the 1960's, leading to a first launch in 1967. Earlier some technologies should have been tested on two DS-K-40 satellites, which both failed to orbit. TsNII-108 GKRE (Zaslavskiy) developed the payload while V M Kovtunenko of Yuzhnoye/OKB-586 build the satellite. After the testing was complete in 1970 the Tselina-O complex was declared operational in 1971, while the whole system was operational in 1976.

Possibly later launches in this list might have been improved Tselina-OK spacecraft, but it is still unclear, if Tselina-OK was ever launched.

After the retirement of the Tselina-O component, Tselina-D took over the general ELINT surveillance function in 1984.

Tselina-D and -O spacecraft were operated simultaneously to provide surveillance and detailed observation and classification of radio emitters. Recorded data was stored on board and dumped to groundstations in the USSR.