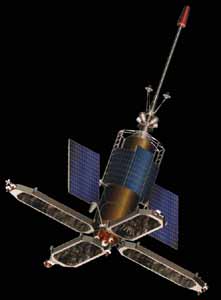 The Tselina-2 (11F644) series of ELINT satellites were replacements for the first generation system. Based on the first generation Tselina-D ELINT, TSNII-KS at the beginning of the 1970's developed the specifications for an improved model with increased frequency range and on-board method of determining the position of fixed transmitters. The original Tselina-2 design was authorised in March 1973 and handled by prime contractor TsNIRTI Minradioprom for the ELINT equipment and KB Yuzhnoye for the spacecraft bus.

The new specification for a universal Army-Navy system called for a satellite with increased mass and lifetime. This would be launched by the Zenit-2 booster, replacing the separate earlier-generation systems. Data transmission was directly to ground stations via geosynchronous communications satellites.

Delays in development of the Zenit-2 launch vehicle resulted in launching the first two trials flights by Proton-K Blok-DM-2 booster in 1984 and 1985.

Tselina-2 is 3-axis stabilized with addition of a gravity gardient boom, basicly an enlarged version of the Tselina-D bus.

US-PM will be replaced by the new Lotos-S ELINT satellites of the Liana system.