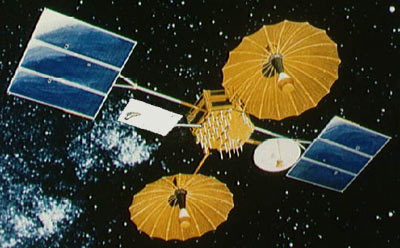 TDRS 7 was the last relay satellite of the first generation of the TDRSS. In this satellite, the C-band capacity of the former models was omitted.

The TDRS (Tracking & Data Relay Satellite) system represents a new way of tracking Earth-orbiting spacecraft, including the Shuttle, and transmitting their data back to Earth.

The TDRS network provides almost full-time coverage not only for the Shuttle, but also for up to 25 other orbiting spacecraft simultaneously.

The fully operational TDRS constellation comprises three on-orbit satellites positioned over the equator, with two stationed 130 degrees apart and a third centrally located between them and designated as an on-orbit spare.

TDRS can provide continuous global coverage of Earth-orbiting spacecraft above 750 miles to an altitude of about 3,100 miles. At lower altitudes there are brief periods when satellites over the Indian Ocean near the equator are out of view. This area is called the geometric zone of exclusion.

Each TDRS is a three-axis stabilized satellite weighing almost 5,000 pounds (about two and a half tons) and measuring 57 feet across the fully deployed solar panels. Spacecraft design employs a modular concept aimed at reducing the cost of individual design and construction efforts that in turn lowers the cost of each satellite.

Each TDRS comprises three modules. The equipment module houses the subsystems that operate the satellite. The attitude control system stabilizes the satellite to enable the antennas to have proper orientation toward the Earth and the solar panels toward the Sun. The solar panel arrays generate more than 1,700 Watts of electrical power for ten years. When the TDRS is in the shadow of the Earth, nickel cadmium batteries supply power. The thermal control subsystem consists of surface coatings and controlled electric heaters.

The communications payload module is composed of the electronic equipment required for linking the user spacecraft with the ground terminal. The receivers and transmitters are mounted in compartments on the back of the single-access antennas to reduce the complexity and possible circuit losses. The fully operational TDRS provides tracking and communications services for up to 26 users simultaneously, with coverage extending from 85 to 100 percent of the user satellite's orbit. An individual TDRS spacecraft can relay signals to up to 22 users at the same time.

The TDRS were the first telecommunications satellites with simultaneous three-band frequency service capability: S-band, C-band and high data rate Ku-band, but on TDRS-7, the C-band capacity was ommitted. The telecommunications payload relays signals to and from the ground station or to and from user satellites. No user signal processing is done onboard. As many functions as possible have been removed from the satellite for performance by the ground station to ensure longer life and allow for more onboard spacecraft communications channels.

The antenna module is composed of four antennas. For single access services, the TDRS satellites have two dual-feed S-band/Ku-band deployable parabolic (umbrella-like) antennas. The antennas are attached on two axes that can move horizontally or vertically to focus the beam on orbiting spacecraft below. The primary reflector surface of each antenna is a gold-clad molybdenum wire mesh. When deployed, 203 square feet of mesh are stretched between 16 supporting tubular ribs. The fully deployed antennas span 44 feet from side to side and 16.3 feet from edge to edge and are used primarily to relay communications to and from user spacecraft. The entire antenna structure, including the ribs, reflector surface, dual-frequency antenna feed and deployment mechanisms that fold and unfold the structure, weighs a mere 53.5 pounds.

The high bit-rate service made possible by these antennas is available to users on a time-shared basis. Each antenna simultaneously supports two user spacecraft services (one at S-band and one at Ku-band).

For multiple-access service, the multi-element S-band phased array of helical (spiral-like) radiators is mounted on the satellite body. The multiple-access forward link (between TDRS and the user spacecraft) transmits command data to the user spacecraft. In the return link, the signal outputs from the array elements are sent to the ground terminal where they are separated.