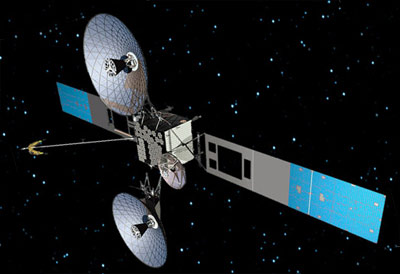 NASA selected Boeing in December 2007 to built the third generation of TDRS (Tracking & Data Relay Satellite) data relay satellites. They are the successors of the second generation TDRS satellites.

This contract includes the design and manufacturing of the TDRS-K series satellites as well as upgrades to NASA's TDRS system ground terminals.

The satellites incorporate a modern design based on flight-proven performance. The three previous TDRS satellites were based on Boeing 702-class electronics, which are still the standard for the newest spacecraft Boeing is building today. Additionally, Boeing has modernized the technologies in the payload, power and propulsion subsystems to current state-of-the-art technologies being used in other Boeing-built spacecraft.

A pair of 15-foot-diameter, flexible mesh antenna reflectors fold up for launch, then spring back into their original cupped circular shape on orbit. These steerable, single-access antennas can simultaneously transmit and receive at S-band and either Ku- or Ka-band, supporting dual independent two-way communication. The selection of Ku- or Ka-band communications is done on the ground.

In addition, an S-band phased array antenna can receive signals from several spacecraft at once, while transmitting to one.

Two more satellites are currently planned. The option for the third satellite, TDRS-M, was exercised in November 2011.

The TDRS-K satellite was launched in 2013, and TDRS-L in 2014, both on Atlas-5(401) launch vehicles. TDRS-M is planned to be ready for launch in late 2015, but will be delayed, as no launch vehicle has been procured by now. The option for TDRS-N was not exercised.