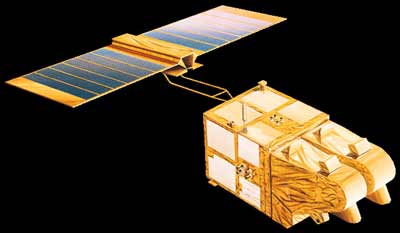 The first generation SPOT satellites were built on the SPOT Mk.1 bus with a lifetime of three years.

The SPOT satellites were identical, with each carrying two identical HRV (High Resolution Visible) imaging instruments that were able to operate in two modes, either simultaneously or individually. The two spectral modes are panchromatic and multispectral. The panchromatic band had a resolution of 10 meters, and the three multispectral bands (G,R,NIR) have resolutions of 20 meters.

SPOT 1 was launched with the last Ariane-1 rocket on 22 February 1986. At the end of operations in 2003, the orbit was lowered to gradually lose altitude until reentry.

SPOT 3 was orbited on 26 September 1993 also on an Ariane-40 H10 rocket. It ended operations in November 1996 due to problems with its stabilization system.