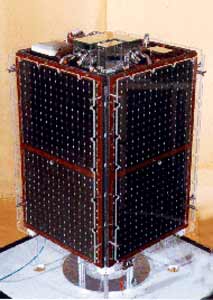 The PoSAT-1 microsatellite has been built at the University of Surrey within a collaborative programme in satellite technology between a consortium of Portuguese academia and Industry (LNETI, EFACEC, OGMA, MARCONI, ALCATEL, IST, UBI & CEDINTEC) and the Univerity of Surrey, managed through Surrey Satellite Technology Ltd.

The PoSAT collaboration is similar in scope to SSTL's highly successful programme with South Korea, which led to the launch of KITSAT-1 in 1992. It has encompassed the installation by SSTL of a satellite groundstation near Lisbon, and the construction of an engineering model satellite by a national team in Portugal. Meanwhile, on-the-Job training and technology transfer to Portugal has been achieved by a team of seven Portuguese engineers working alongside SSTL engineers at Surrey on the design, construction and test of the first Portuguese satellite, PoSAT-1, for launch by Ariane in September 1993.