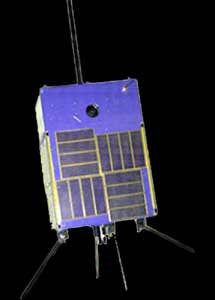 Webersat (WO 18, OSCAR 18) was launched on the first ARIANE ASAP flight V35 with SPOT 2, on the 22. January 1990 (01:35:27 GMT) into an 780 km sun-synchronous, 98 degree inclined orbit, this 16 kg amateur radio micro-satellite was built by Weber State University's Center for Aerospace Technology (CAST). It has a full colour CCD camera, Digital Store and Forward packet communication transponder, spectrometer, and particle impact detector. It is box shaped with dimensions of 317 × 230 × 230 mm, with four solar panels and weighs 16.03 kg. Downlink frequency is 437.104 MHz SSB 1200 Baud PSK AX.25

The satellite suffered an apparent radiation induced computer failure on the 23. August 1997, which recovered in November 1997. It was officially declared non-operational in 1998 when engineers were unable to resolve a software crash.