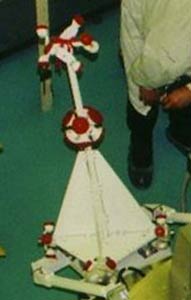 The Reflector (Retro-reflector Ensemble For Laser Experiments, Calibration, Testing & Optical Research) microsatellite is a passive reflective spatial reference test object consisting of separate prism retroreflectors placed in reference points (nodes). It will be used for retroreflection of laser radiation coming from a ground-based laser radar to analyze and investigate the return signal structure for determination of spatial (angular) resolution, testing, and identification of spacecraft which may be defined as space debris. The REFLECTOR microsatellite was launched as a piggyback load on board of the Meteor-3M 1 satellite.

REFLECTOR is a passive satellite who's only instrumentation onboard is a retroreflector array. The REFLECTOR microsatellite is a system of 32 retroreflectors in holders placed in defined node points of a spatial test object (see picture). Depending on the microsatellite's long vertical axis orientation (the extendable beam may be pointed towards the zenith or nadir), only one of the 16-retroreflector groups is actually working at any moment. Because of spatial diversity of several groups of retroreflectors, there will be several simultaneous tracks with range differences up to 1.365 meters.

The specifications of the retro-reflectors carried on REFLECTOR are:

The basic retro-reflector has a hexagonal shaped aperture of 28.2 mm diameter so the diffraction-limited beam returned from one of these retros is a roughly symmetric pattern of about 4.0-arc sec (FWHM) in angular extent. However, to address the effects of the relativistic velocity aberration that dislocates the return beam along the orbital ground path, the retros on REFLECTOR were modified to improve the efficiency of light returning to the illuminating site. This was done by placing a 16 mm wide rectangular aperture across the face of each retro. When the spacecraft is in orbit, the slits will be oriented orthogonal to the orbit direction. The slits cause two effects - diffraction from the slit elongates the pattern along the orbital direction (to about 6.1 arc sec, FWHM) but the slit also limits the input acceptance angle to the retro. The net effect is an improvement in energy returned to the illumination ground site but a limitation on the acceptable illumination angles.

To make REFLECTOR more useful to the general laser ranging and remote sensing community, the group of retros at the mid-section of the vehicle were modified to cause a polarization change to the reflected light. Polarization sensitive measurements using laser systems is a growing approach for sensing applications. In most cases, retro-reflectors have little effect on the polarization of the incident light. No other retro-reflectors are currently in orbit that provide a specific polarization signature to the returning light. For REFLECTOR, 1/4 wave plates were placed over the entrance apertures of the 4 center retros. The fast axis of the 1/4 wave plate was aligned with the vehicle's central body tube. Light returned from these retros will pass through the 1/4 wave plate twice, once on the way in to the retro and once on the way out. The polarization change imparted to the light will depend on the incident angle, which will be a relatively complicated but predictable function of the vehicle orbit parameters and the ground site position. Bench measurements with and without the wave plates in front of a test retro showed no significant effects on the divergence of the return beam.