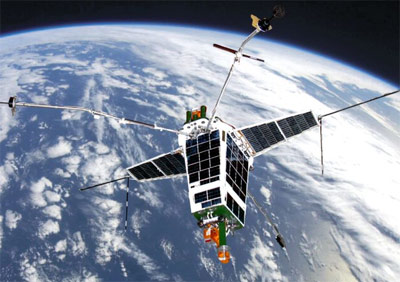 Compass (Complex Orbital Magneto-Plasma Autonomous Small Satellite) or Kompas (Kompleksniy Orbital'niy Magnito-Plazmenniy Avtonomniy Sputnik) is intended for the detection of the effects of the action of the tectonic breakings of the Earth on the environment, the search for lithospheric, atmospheric and ionospheric responses to changes in the state of the zone of the tectonic activity, which can be important for the prediction/forecast of natural catastrophes, the study of the possibility of the development/detection of the concealed/latent layers of useful minerals - including of oil, gas.

The Kompas 1 satellite was originaly designed to be launched by a Shtil-1 launch vehicle, but was rescheduled for a Zenit-2 piggy-back launch.

Kompas 2 was launched on a Shtil-1. The satellite initially failed to respond to ground commands after launch, but was later put into service when the problem was resolved.

Kompas 2N was to share a launch with Sumbandila (ZA-002) on a Shtil-2.1 vehicle. This launch agreement was cancelled and the satellite remained grounded.